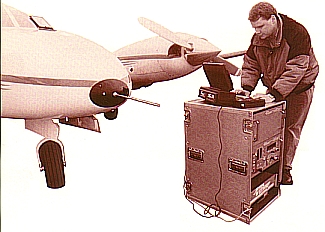 Colin Minty, president of Airwave Electronics, shows off the flame ionization leak detection unit. A special probe, mounted on the front of a fixed-wing plane, draws air directly to the ionizer unit which detects the presence of methane indicating a pipeline leak.

Detecting gas leaks the size of pinholes in a pipeline system 18,829 kilometres (11,700 miles) long is the responsibility of AGTD’s pipeline support and maintenance planning team.

To help meet this challenge, new gas leak detection technologies are constantly being evaluated, to find more precise and cost-effective ways of protecting the integrity of the NOVA pipeline system.

Gillis is referring to flame ionization leak detection, which has been refined for airborne testing.

Basic chemistry makes flame ionization leak detection work. A flame inside the detection unit is powered by hydrogen. The plane flies along the pipeline and the flame in the unit reacts to methane, indicating a leak.

The challenge is to transfer this technology to a small aircraft with a limited payload. The readings from 61 metres (200 feet) above the pipeline must be taken from undisturbed air (no airplane exhaust) and retain enough accuracy to pinpoint the location of the leak within 100 metres (328 feet).

A local Calgary company, Airwave Electronics, has developed specialized equipment that allows undisturbed air to be drawn directly to the analyzer, using a special probe mounted on the front of a fixed-wing plane. The equipment has also been reconfigured to reduce the weight and size for aviation safety purposes.

Several members of the AGTD pipeline support and maintenance planning team are participating in tests of this technology, which involve releasing a small amount of gas from two valves on the western system near the Knight compressor station. The test showed the gas disbursement plume above the pipeline.

“With this technology, you can fly an entire pipeline system in hours rather than walking or driving the system, so the cost-savings could be substantial,” confirms Gillis.

We use cookies on our website to give you the most relevant experience by remembering your preferences and repeat visits. By clicking “Accept”, you consent to the use of ALL the cookies.
Cookie settingsACCEPT
Manage consent

This website uses cookies to improve your experience while you navigate through the website. Out of these, the cookies that are categorized as necessary are stored on your browser as they are essential for the working of basic functionalities of the website. We also use third-party cookies that help us analyze and understand how you use this website. These cookies will be stored in your browser only with your consent. You also have the option to opt-out of these cookies. But opting out of some of these cookies may affect your browsing experience.
Necessary Always Enabled
Necessary cookies are absolutely essential for the website to function properly. These cookies ensure basic functionalities and security features of the website, anonymously.
Functional
Functional cookies help to perform certain functionalities like sharing the content of the website on social media platforms, collect feedbacks, and other third-party features.
Performance
Performance cookies are used to understand and analyze the key performance indexes of the website which helps in delivering a better user experience for the visitors.
Analytics
Analytical cookies are used to understand how visitors interact with the website. These cookies help provide information on metrics the number of visitors, bounce rate, traffic source, etc.
Advertisement
Advertisement cookies are used to provide visitors with relevant ads and marketing campaigns. These cookies track visitors across websites and collect information to provide customized ads.
Others
Other uncategorized cookies are those that are being analyzed and have not been classified into a category as yet.
SAVE & ACCEPT